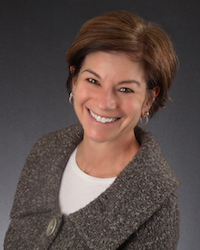 Ilana S. Wilenkin has lived in Michigan (Southfield, West Bloomfield, Gaylord, and Birmingham.) She grew up in a family of attorneys and has always been motivated to help others. Ms. Wilenkin also possesses a strong work ethic, working since 15 years-of-age, at which time she secured a part-time hostess position at a local deli to augment her formal high-school education with real-life experience.

After graduating high-school, Ms. Wilenkin worked full-time while attending Oakland University, where she obtained a Bachelor of Science, and, thereafter, attended the University of Detroit Mercy School of Law, where she graduated in 2000 with honors, earning a Juris Doctor.

Ms. Wilenkin joined Feldheim & Wilenkin, P.C. in 2004 as an associate and began developing a practice focused exclusively on individual and ERISA-governed short and long-term disability claims. She became a partner in 2008 and has successfully helped hundreds of clients challenge insurance company denials at both the administrative (insurance company) and judicial levels. Ms. Wilenkin has won many cases in the United States District Courts for the Eastern and Western Districts of Michigan as well as the United States Court of Appeals for the Sixth Circuit. Her clients appreciate Ms. Wilenkin’s knowledge, expertise, and compassion and repeatedly call on her for assistance handling their claims as well as directing their friends, colleagues, and family members to her for representation.

Ms. Wilenkin believes in educating the public/clients about the nature of her practice and is always available to answer questions and provide written materials to make the process easier to understand and less intimidating. She is always available via phone, email, or fax and promptly responds to all requests.

Languages
Contact Us
Practice Areas
Client Reviews
★★★★★
I want to thank you for everything that you did for me. Words cannot express how much I appreciate your kindness, your compassion, and your sincerity. You are one of the special people in life that touch lives and make a difference. I feel privileged with the opportunity of having you represent me with my case. C. Scott
★★★★★
Thank you so much for what you have done for me. I'm glad someone like you was there to help me through it. You are a very special and gifted person, Lani. Paul Dockery
★★★★★
Thank you for the experience and legal assistance during a profoundly stressful time for me. Your legal services were pragmatic, informative, and courteous. I will continue to tell everyone about you, your firm, and your excellent services. Thanks. L. Sanders
View More
Submit a Law Firm Client Review